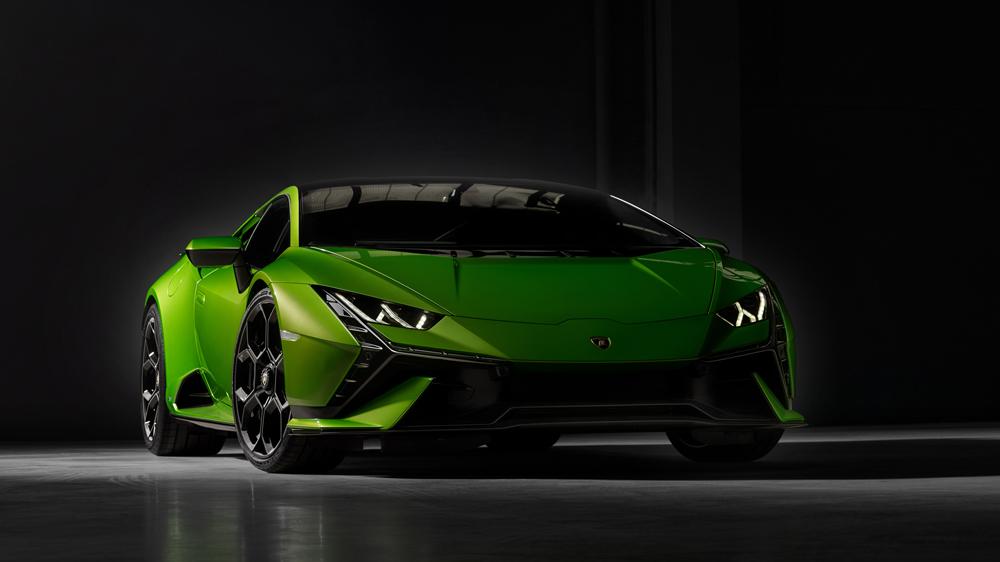 With new looks and the same power train as the STO, this 640 hp variant also offers more connectivity than any other Raging Bull.

This past fall, the Lamborghini Huracán Super Trofeo Omolagata (STO) was showing off its track prowess at Willow Springs International Raceway, in Rosamond, Calif., while the marque’s chief technical officer, Maurizio Reggiani, was on hand beaming like a proud father. At the time, it was the latest release for a model line introduced in 2014 as a complement to the flagship Aventador, and Reggiani assured that there would be no other Huracán with the same level of motorsport-inspired performance. He stopped short, though, on stating whether the family tree was now full, or if another sibling could be expected. The answer to that came this morning with the announcement of the Lamborghini Huracán Tecnica. And as the name implies, tech is its touchstone.

Regarding the Tecnica’s fit in the Huracán hierarchy, Lamborghini chairman and CEO Stephan Winkelman stated in the official announcement that it “completes the Huracán lineup, sitting perfectly between the [Evo] RWD and the track-focused STO, flawlessly presenting technology, performance and the Huracán’s V-10 aspirated engine in a dramatically evolved design.” 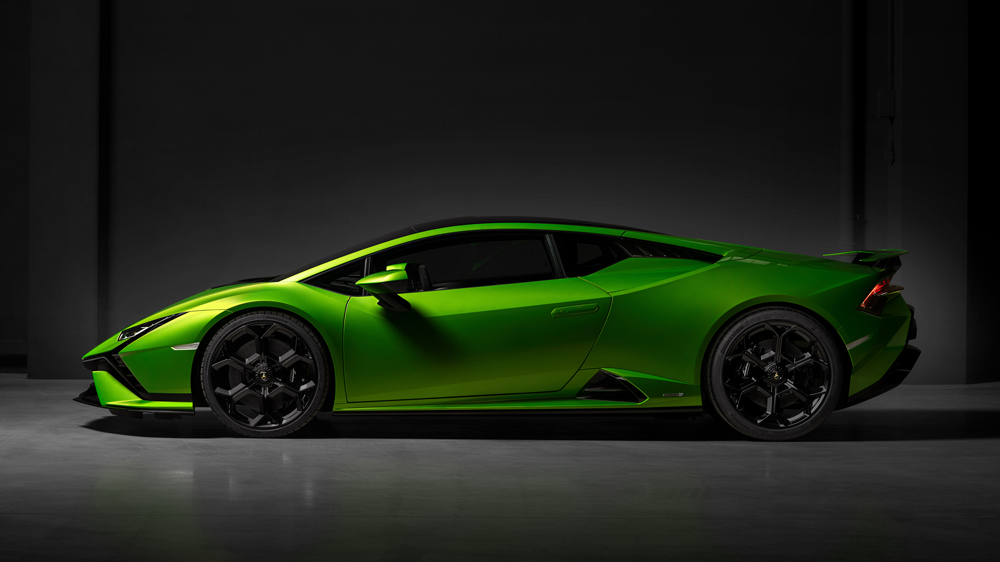 The new rear-wheel-drive variant carries the same 640 hp, 5.2-liter naturally aspirated V-10—with 417 ft-lbs of torque—found in the STO, which represents an increase of 30 hp and nearly 4 ft-lbs of torque compared to the Evo RWD. But it was designed and engineered to bridge the gap where its stablemates fell short.

“It’s important that our cars have their own special character,” says Mitja Borkert, Lamborghini’s head of design, while giving Robb Report a virtual walk-around of the Tecnica in preparation for the New York International Auto Show this week. While the new release does not have the racing pedigree as the STO, a car Borkert says “takes 100 percent of the DNA of our Super Trofeo cars to a street-homologated car,” the Tecnica is much more of a daily driver while being, according to Borkert, “much more agile and higher in performance” than the Evo RWD. Reasons he cites include the Tecnica’s rear-wheel steering and a uniquely tuned suspension. 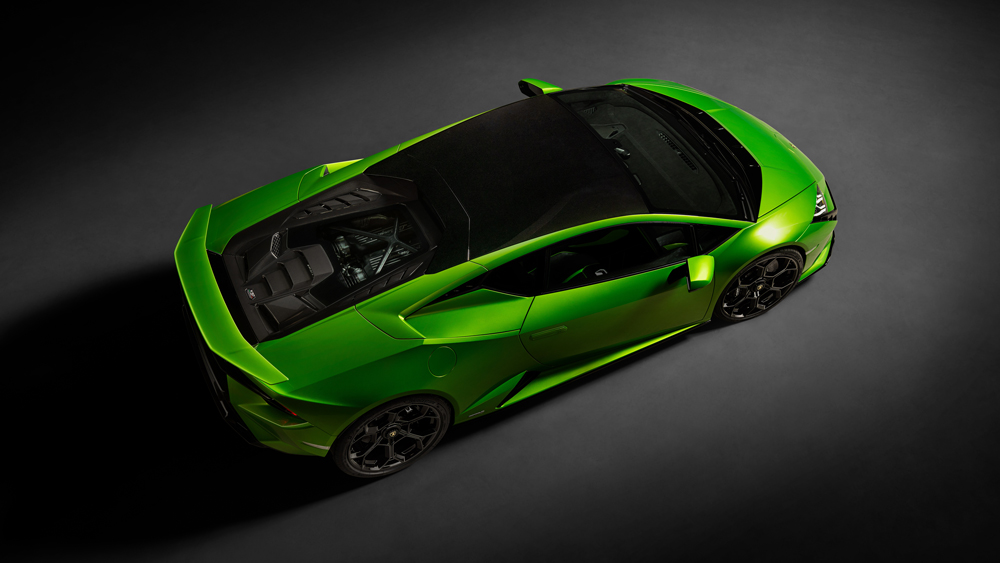 The car is claimed to cover zero to 62 mph in 3.2 seconds and reach roughly 202 mph. Photo by Philipp Rupprecht, Automobili Lamborghini S.p.A.

Those two facets are tied to the familiar, yet still cutting-edge, Lamborghini Dinamica Veicola Integrata (LDVI) system, a super processor that acts as mission control when it comes to pilot inputs and how they are translated, nearly instantaneously, to help inform the Performance Traction Control and torque-vectoring systems. All of that is further refined by the three drive modes of Strada, Sport, and Corsa, each with successively more aggressive engine and transmission mapping.

With its 3,040-pound dry weight and a seven-speed dual-clutch transmission managing the power plant, the car is claimed to cover zero to 62 mph in 3.2 seconds and reach a top speed of roughly 202 mph. Carbon-ceramic brakes (six-piston calipers in front, four-piston calipers in back) work to bring the Bridgestone Potenza Sport tires, wrapped around 20-inch Damiso wheels reflective of the Vision GT, to a complete stop from 62 mph in just 103.3 feet. 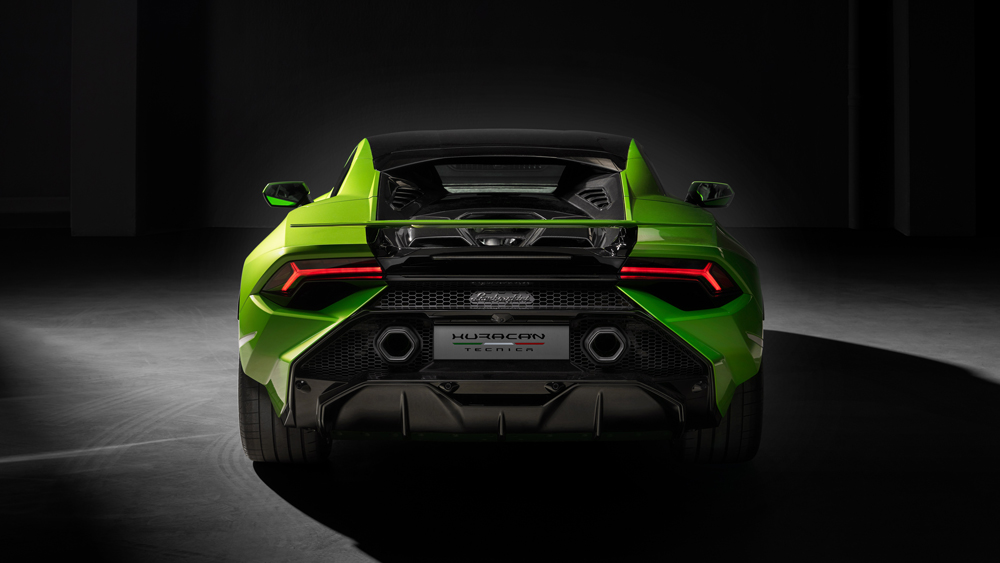 Features like a fixed rear wing contribute to the Tecnica’s dry weight of only 3,040 pounds. Photo by Philipp Rupprecht, Automobili Lamborghini S.p.A.

Emphasizing what is intended to be the Tecnica’s unique balance, as well as its place in the Huracán pantheon, are the visual cues presented on its aluminum-and-composite body. “First of all, from the side, you will see that the front end is slightly longer [2.4 inches, to be exact], so we have worked heavily on the aerodynamics. We have increased the downforce on the car by 35 percent [compared to the Evo RWD], especially on the rear of the car,” Borkert says. He adds that the rear wing is fixed to reduce weight and is more integrated with the back of the car than, say, the higher wing on the Performante. At the same time, there has been a 20 percent decrease in overall drag from the Evo. 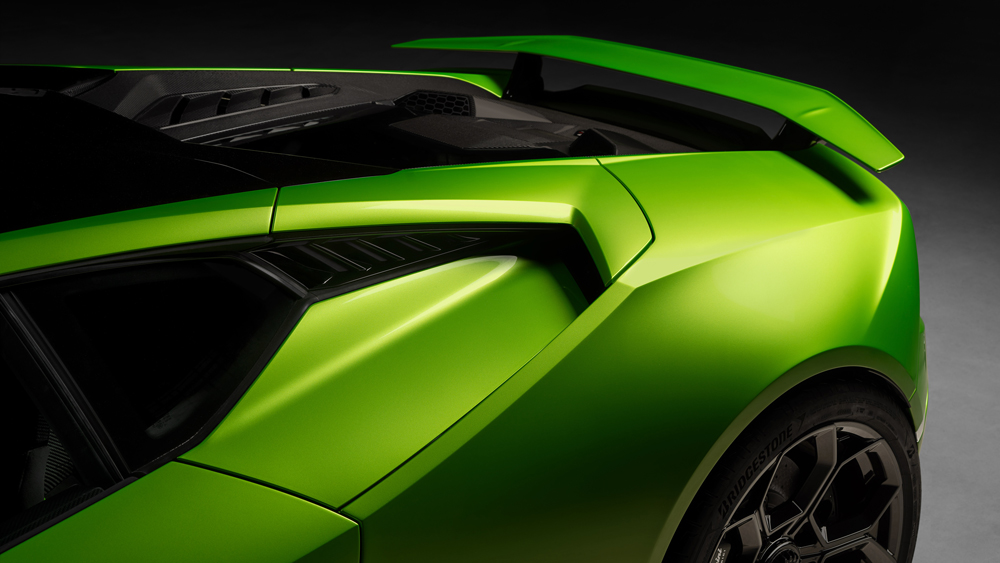 Styling for the side daylight openings (DLO) was inspired by Lamborghini’s Essenza SCV12. Photo by Philipp Rupprecht, Automobili Lamborghini S.p.A.

Despite the fact that, other than length, the Tecnica has the same dimensions as the Evo, the car looks wider, lower in profile, and more muscular. This is due in part to the redesigned back end, broad and sculpted haunches, and a front window that Borkert says has been “visually elongated” due to his re-envisioning the lines on the carbon-fiber front. He also tapped into aesthetic elements from some of Lamborghini’s unobtainium, including a front bumper inspired by accents on the Terzo Millennio concept, and side daylight openings inspired by the Essenza SCV12 that also incorporate air intakes. 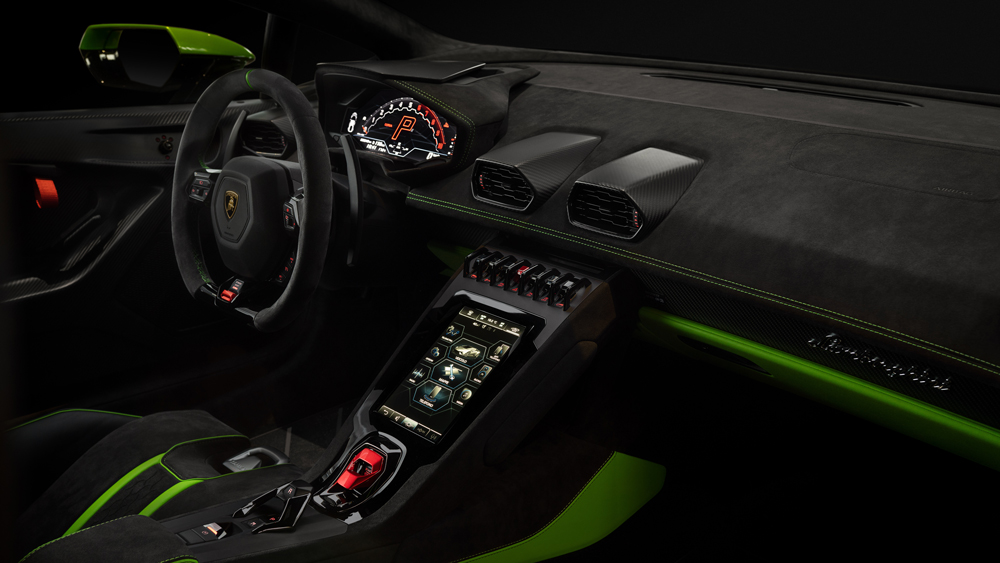 The dash features improved legibility, and the user interface provides onboard telemetry that can be shared. Photo by Philipp Rupprecht, Automobili Lamborghini S.p.A.

Where the tech comes into full view is in the cockpit of the car, touted as having the greatest amount of connectivity found in any Lamborghini model. The dash features improved visibility and legibility, and the user interface provides digital diaries and onboard telemetry that can be shared, as well as compatibility with Amazon Alexa, Android Auto, and Apple CarPlay.

“This is the biggest design update we have ever done on the Huracán,” says Borkert of the Tecnica, which starts at $239,000. “It looks new from every perspective.” Orders are being accepted as of today, with deliveries set to begin in the fall.